The MemoGIS historical geographic information system superimposes data on more than 30,000 victims of the Holocaust, places of persecution, the shrinking public space of the time period, and the city’s other inhabitants onto an interactive map of Prague. MemoGIS is designed as a mobile web application that allows users to conduct research not only from their homes or school computers, but also from their mobile phones while walking in the city. 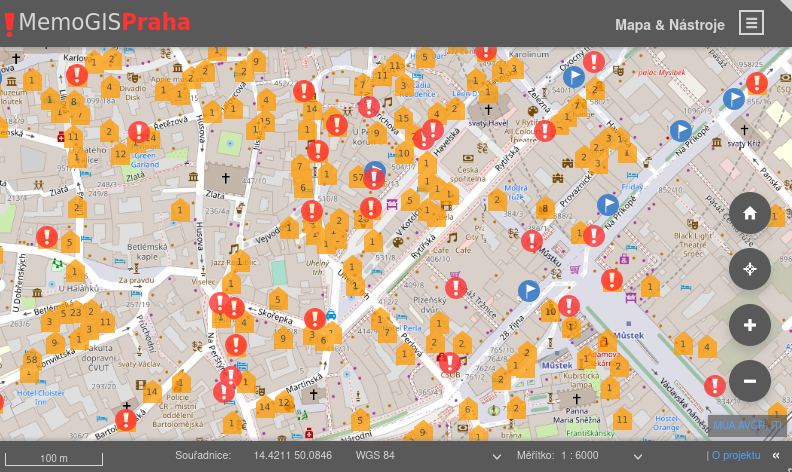 What data does MemoGIS contain?

The app displays data on more than 30,000 Holocaust victims, 1,700 cases of violations of anti-Jewish laws and regulations, and 200 points of interest.

The data on Holocaust victims comes from the Database of Victims maintained by the Terezín Initiative Institute. Thanks to its extensive digital archive, which contains digitized copies of selected documents from the Prague Police Directorate’s files and much more, it was possible to process data on more than 1,700 cases of violations of anti-Jewish laws and regulations and make it available on MemoGIS. The app also includes points of interest, i.e. places connected to the everyday lives of Prague’s Jewish residents that were later directly related to their persecution.

MemoGIS uses Geographic Information System methods, technology that was developed for the purpose of displaying information accurately on a map using coordinates. Researchers who use GIS and those working on the geography of the Holocaust acknowledge that this originally military technology has its limitations in that it translates a complex reality into simple data displayable on a map. It doesn’t take into account uncertainty, ambiguity, or subjective perceptions of time and space. MemoGIS therefore can’t present the experience of Jewish victims of the Holocaust and other residents of Prague in its entirety, but can serve as an impetus to reimagine the public space that we freely move through, which is where Jews first began to be excluded from society.

The various types of data are split into so-called layers, which users of the app can easily switch between or create their own combinations:

Number of Jews in Prague’s districts:

This layer displays summary information about the number of Jews residing in the various Prague districts based on the number of Jews registered as living in Prague as of October 1941. Since its display is tied to the map’s scale, it can go up to 1:15,001 magnification.

Information from the Database of Victims maintained by the Terezín Initiative Institute was used in this level.

Incidents Within the City of Prague:

This layer shows incidents of violations of anti-Jewish regulations and ordinances.

Immediately after the Protectorate was established, people who were thought to be Jews were subjected to a number of prohibitions and regulations aimed at restricting their personal freedoms and isolating them from the non-Jewish population, gradually leading to segregation. The decrees, orders, and prohibitions that came into force in 1939-1943 limited their personal space and restricted their freedom of movement throughout the public space as well as their access to resources and information. Jews weren’t allowed to leave their places of residency without permission and the number of restricted zones in cities increased. They were no longer allowed to enter most public parks, gardens, forests, and relaxation areas. Shopping and office hours for Jews were shortened. They couldn’t walk down certain streets or loiter in the vicinity of certain buildings. A strict 8:00 p.m. curfew was enforced. Cafes, restaurants, cinemas, theaters, concerts, libraries, and public swimming pools were all on the list of places that were off-limits to Jews.

The MemoGIS Prague project extracted data from the digitized documents of the Prague Police. These include information on non-compliance with spatial prohibitions, identification papers not marked with the letter “J” (Jude), etc. The reports on individual “incidents” refer to the original documents accessible on www.holocaust.cz, where further details can be found.

Points of Interest in the City of Prague:

This layer consists of information on more than 200 points of interest, i.e. places that were part of the everyday life of Jewish residents of Prague as well as sites associated with their persecution.

Jewish Homes in Prague During the Occupation:

In this layer, you will find information about the number of Jewish inhabitants and their individual addresses. This information generally comes from the registration of Jews in the Protectorate, which began in the fall of 1941. In many cases, it acts as evidence that some Jewish residents had already been forcibly moved to another neighborhood or into shared apartments. This layer is displayed to the map’s scale and can go up to 1:15,001 magnification.

This layer without any graphics on the map offers textual information on the victims of the Holocaust living in individual apartment buildings, including links to the Database of Victims available on www.holocaust.cz.

In this specific layer, you can select a historic map of Prague as your display background.

This map of the capital city of Prague from 1938 was digitized by the Municipal Library in Prague. Together with its indexes, it’s available at http://web2.mlp.cz/mapa1938/klad.php. The map is used with the generous permission of the Municipal Library and was georeferenced by the Masaryk Institute and Archives of the Czech Academy of Sciences.

Viewing the layers of the map

The individual data types are split into layers that the user can freely switch between while using the app. The option to select what layer to be displayed can be found in the main menu in the upper right corner of the screen.

Zooming in and out on the mapThe zoom in and zoom out buttons are located in the bottom right corner of the screen. They are only displayed while you are using the app on the computer. If you are working on your mobile device, you can zoom in and out using touch gestures.

You can turn the position determination service on and off using the button on the bottom right corner of the screen. Activating the button allows you to see where you are on the map. The positioning button has three modes that can be accessed by pressing them on and off. The user can continue to browse the map as needed if it’s switched on and centered on the user’s location.

The project “Integration and Segregation in the City Space: The History of the Holocaust in Prague Through a Mobile Web Application (identifier TL01000366) was supported by the Technology Agency of the Czech Republic as part of the public ÉTA 1 program.

The MemoGIS application was created by the Masaryk Institute and Archives of the Czech Academy of Sciences in cooperation with the Terezín Initiative Institute and the Multicultural Center in Prague.

Have you found an error?

If you’ve encountered a technical problem or error in the data displayed, please use the bug report form and let us know.